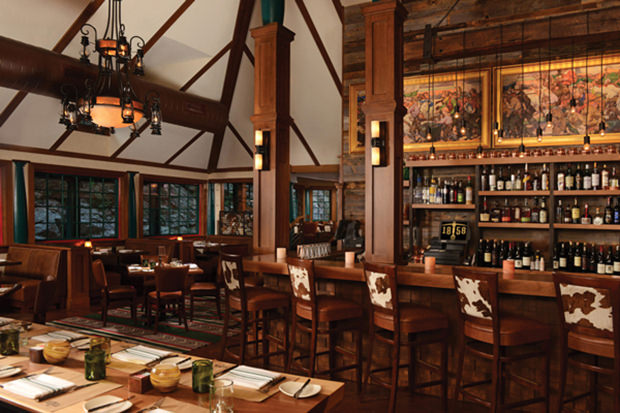 The Broadmoor hits pay dirt with Restaurant 1858 at Seven Falls.

Known as “Colorado’s Grandest Mile of Scenery,” Seven Falls is one of the oldest natural attractions in the Pikes Peak Region and the only popular destination in Colorado to make National Geographic’s list of International Waterfalls. The historic site took a serious blow in 2013—it closed after destructive flash floods ruined the road into and trails around South Cheyenne Canyon, tore down trees, and ripped out lights that illuminated the seven drops of the majestic 181-foot waterfall.

Last year, the Broadmoor purchased Seven Falls from the Hill family, who had owned it for nearly seven decades. The Anschutz Corporation, the Broadmoor’s owner/caretaker, has poured millions into restoration, repair and upgrades, including a zipline course and a new eating place. Just five minutes from the iconic Broadmoor Hotel, Restaurant 1858 is hemmed in by the sheer granite walls at the base of the waterfall. A Seven Falls ticket is required to access the establishment. There’s no on-site parking; free shuttles leave from the hotel’s east lot. Although there’s another shuttle at the entrance waiting to whisk you to the restaurant beautiful hike into the park helps work up an appetite—it’s the alpine equivalent of a bar serving salted nuts to make you drink more.

The Colorado cuisine pays tribute to the French, German, and Creole origins of the early miners and fortune seekers. Driven by chef de cuisine Katie Symons, who has worked for Nobu in Las Vegas and West Virgina’s famous Greenbrier resort, the 1858 menu presents an impressive range of game meats, all farm-raised to meet USDA inspection standards. “I want even more protein on the menu, like elk,” Symons allows. “And I’d love to do squab—it’s such a meaty bird.”

The housemade Wild Boar Green Chili—Pueblo green chili, corn and tomatillo (the secret ingredient in any great bowl of green)—also comes slathered on the Chili con Queso Nachos for a group. Of the other starters, everyone from staff to regulars proselytize the BBQ Colorado Trout Fritters, and you will come to testify to their awesomeness—extra crispy on the outside and tender on the inside, loaded with big chunks of house smoked trout and sweet corn and served with creamy Creole mustard sauce for dipping.

The Vidalia Onion Rings arrive accompanied by jalapeños, red onion and ranch dressing—the latter homemade, as it has to be, according to our server Leanne, a Southern girl (Atlanta) who knows her food. The dressing is creamy without being heavy, with the kick of fresh herbs and an understated garlic aspect, so much more vivid than the bottled glop using chemicals and preservatives. And what’s that savory component in the breading? It’s the proprietary barbecue seasoning, a blend that includes the subtle, smoky flavor of Spanish paprika.

The entrees reflect Symons’ passion for Colorado-centric dishes. The 1858 Mixed Grill gathers Eagles Nest Ranch quail, bison roast and venison sausage with black pepper roasted garlic spaetzle (traditional German dumplings) and tasty pole beans. The Longmont 8 oz. Bison Burger is juicy and full of flavor—best served medium rare with sharp cheddar, BBQ mayonnaise and fries. The Low Country Shrimp & Grits is made to 1858’s fancy—Symons takes the Southern style dish (said to have begun as a fisherman’s breakfast) to another level by using stone-ground grits and adding smoked bacon, scallions and hot sauce. It’s as flavor-packed as fare on any menu between Charleston and Savannah.

But 1858 hits the mother lode with Colorado Rocky Mountain Trout, prepared in a variety of ways. On the lunch menu, there’s the Cast Iron Classic, with hickory smoked bacon, brown butter, lemon and parsley, as well as the Barbecue (1858 sauce, pickled jalapeños and red onion) and Creole (blackened). For supper, you can enjoy the freshwater fish several other ways—Crispy Southern Fried (cornmeal and buttermilk breaded with lemon mayonnaise), Low Country (crispy Vidalia onion rings and caramelized onion butter) and Simply Grilled. The standout is Back East—trout wrapped in Virginia country ham, baked and served with grilled brandied peaches.

Of course, save room for something sweet. The Palisade Peach Cobbler is a killer home-style dessert, as is the Huckleberry, Blackberry Pie—a chance to wrap your taste buds around some fresh huckleberries, smaller and sweeter than commercially raised blueberries.

All told, Restaurant 1858 is a great place for a round of Symons says: “It’s a wonderful feeling,” she notes, “to be a part of the classic Broadmoor experience—and to cook for people from all over the world.”