Reviews on the hautest dining spots in Vail, Beaver Creek, Aspen, Telluride, and Durango. Including The Wild Fig, Eolus Restaurant, Matsuhisa and more. 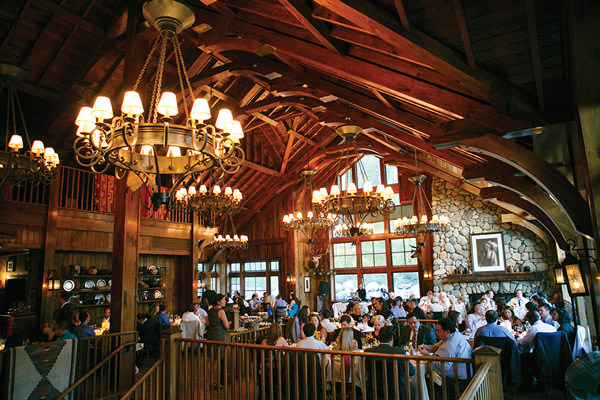 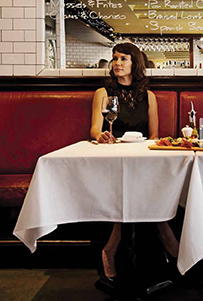 This intimate and charming brasserie transports you to the Latin Quarter with globe lamps, white Métro tiling, plush burgundy banquettes and bill of fare handwritten on mirrored walls. Drawing from French, Italian, Greek, Spanish and Moroccan cuisines, the menu drips with flavors. Starters include mussels in a curry coconut broth and spicy gazpacho with shrimp and avocado. Jalapeño butter peppers the flatiron steak frites, while a harissa rub seasons the roasted chicken. Like any Mediterranean restaurant worth its sea salt, Wild Fig’s fish dishes reign supreme. Proof comes in the forms of Executive Chef Pompeyo Lopez’s marvelous Fish in a Bag and special Spanish Seafood Stew.

AND…The Wild Fig is owned by the CP Restaurant Group, whose Aspen portfolio includes the elegant Monarch Steakhouse (411 South Monarch Street), where Siberian Osetra highlights the caviar selection, the bespoke manhattans come in titivating iterations and the 32-oz tomahawk rib eye is perfect to share with a choice of eight sauces (such as a Cream Sherry Mushroom Ragout) and eight “crowns” (including king crab legs and seared diver scallops). monarchaspen.com; 970-925-2838 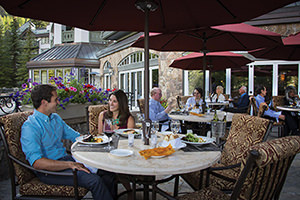 Splendido epitomizes the Beaver Creek experience. Located in the opulent Chateau Beaver Creek, the restaurant, under new owner-chef Brian Ackerman, dedicates itself to impeccable service and exquisite preparations of classics like Colorado Lamb, Idaho Trout, Dover Sole and Peking Duck. Treat yourself to the Lamb Carpaccio or King Crab, or go all-in with the Royal Osetra Blini appetizer followed by the decadent Côte de Boeuf with morels and cheesy aligot potatoes. For a final flourish, savor the orange soufflé with Grand Marnier.

AND…Beano’s Cabin, which for more than 30 years has provided après-ski dining, features summer hours Wednesdays through Saturdays until September 23. Hike or take a 10-minute shuttle van, one-hour horseback ride or a 20-minute tractor pulled wagon ride to the restaurant, where a $107 prix-fixe five-course dinner rewards those who make a reservation. More than a novelty, Beano’s delivers superb gourmet cuisine in the form of Dungeness Crabcakes, foie gras, coffee-spiced venison and other delicacies. beanoscabinbeavercreek.com; 970-754-3463 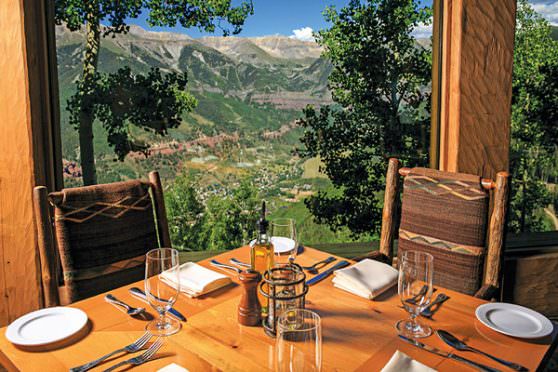 Perched at 10,551 feet above sea level and accessible only by a free five-minute gondola ride from either Telluride or the Mountain Village, Allred’s boasts one of the most amazing dining ambiences in Colorado. Full-length picture windows overlook a sea of aspen and the town of Telluride more than a thousand feet below. The elevated cuisine is every bit the equal of the views—and both change with the seasons. Starters can include crispy shishito peppers, scrumptious potato croutons with grana padano cheese, and diver scallops with pickled rhubarb; try entrees such as cider-brined pork chops with white cheddar grits, juniper bourbon marinated elk strip loin, waygu beef carpaccio and ricotta cavatelli. An extensive wine list and the charm of General Manager Mario Petillo complete the top-of the world experience.

Vail teems with can’t-miss, high-end restaurants—from Sweet Basil to Pepi’s to Pendulum to Elway’s to Cucina. Don’t overlook Matsuhisa Vail—one of Chef Nobu’s three Colorado creations—in the five-star Solaris development. It sports a stone fireplace, outdoor fire pits, custom woodwork and large indigenous stone pillars and walls. Floor-to-ceiling windows reveal a panoramic view of Vail Mountain, and the front of the restaurant expands into a sprawling outdoor patio. The encyclopedic menu is just as expansive, covering multiple styles of Japanese cuisine, with spins on sushi, sashimi, tempura, udon and more. Abalone with Light Garlic Sauce, Yellowtail Sashimi with Jalapeño, Black Cod Miso and Whitefish Tiradito rate as the signature dishes, but for a real treat, spring for the $175 Omakase—the chef’s daily creation, custom-made for you.

Though its Homerian name suggests Greek cuisine, this eclectic eatery draws inspiration from Mount Eolus, a fourteener in the nearby San Juan Mountains. The menu features Asian influences, with Pork Steamed Buns and no fewer than five types of sushi roll, as well as an unconventional Lobster Corn Dog and Lobster Burger (a dressed-up half-lobster tail atop grass-fed beef in a bun). The seafood stew is sublime, as are the grilled hanger steak, pork chop and salmon. A Wine Spectator Award of Excellence winner, Eolus also features an earthy, atmospheric dining room and rooftop patio.

AND… Pssst, want a sidecar with that shave? Just get the password from the website and head to TheBookcase & Barber—a former bookstore that’s now an actual barbershop with a false bookcase that (upon utterance of the password) opens into a fittingly appointed Prohibition-style speakeasy with superb cocktails named for the famous writers who favored them. The Faulkner is a mint julep, the Fitzgerald, a gin rickey; the Hemingway comes in two parts: a Daiquiri and Death in the Afternoon. It’s all served with sly smile and plenty of style. thebookcaseandbarber.com

Maybe you’re self-secure enough to think it’s no one’s business how much you paid for the new Lexus or custom-made putter or even those golf shoes your wife swore were Manolo Blahniks. So you certainly don’t worry about making a bidding war out of a wine list. We all know there are ways to impress friends without breaking the bank, which leaves more in your wallet for that new driver you’ve been eyeing. A few suggestions for wines whose value far exceeds their price. And don’t worry: we’re not telling anyone how smart you are. Let them figure it out. 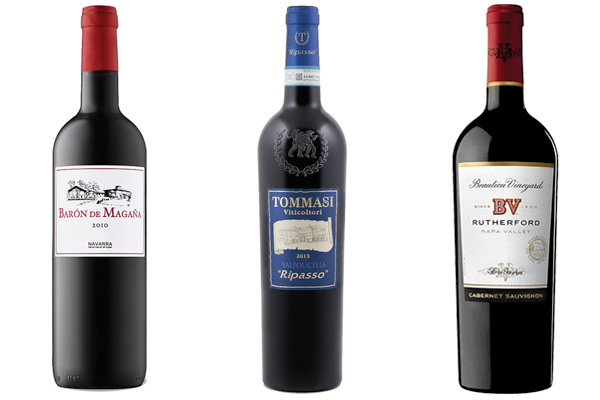 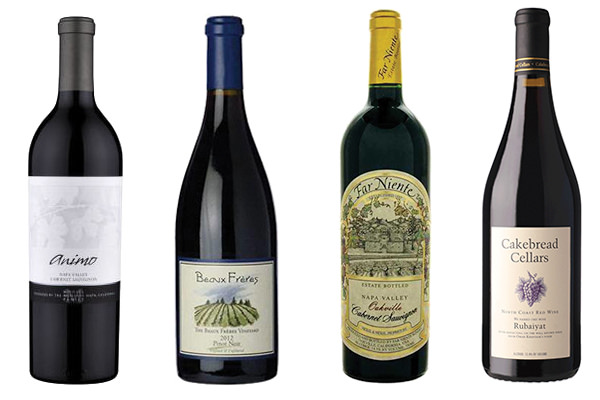 Domaine Gueguen 2015 Chablis ($18-$30) Stylish and crisp, full of stone fruit and hints of lime, with a linear acidity that holds it all together. 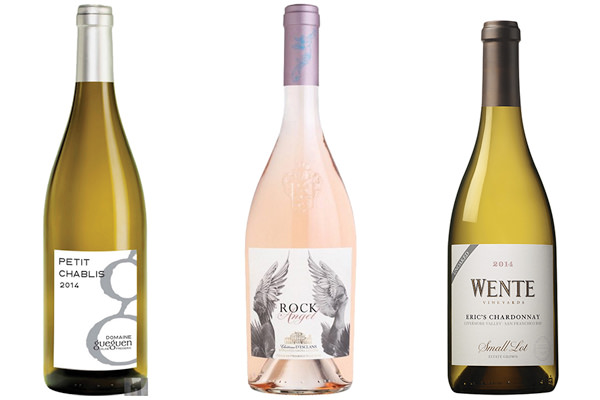 This article appears in the August/September 2017 issue of Colorado AvidGolfer— the state’s leading resource for golf and the lifestyle that surrounds it, publishing eight issues annually and proudly delivering daily content via coloradoavidgolfer.com.