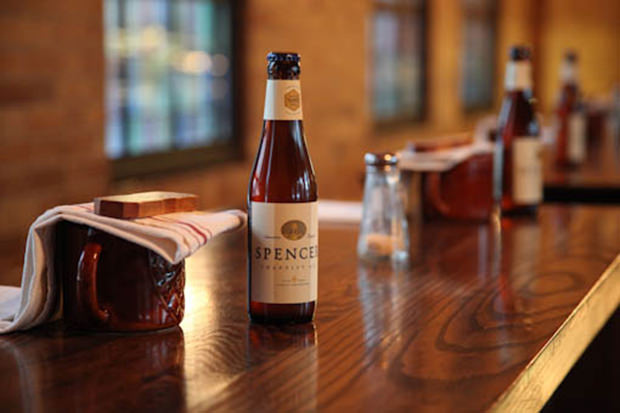 With all the depth of a fine wine, high-gravity and barrel-aged beers can replace some of the bottles in your cellar.

As the experience level of beer drinkers continues to expand, so does their affinity for more adventurous and rare brews. These days, you’ll be hard-pressed to find a brewery that doesn’t offer some sort of limited-edition, barrel-aged beer or high-alcohol, special-yeast products that lend themselves to aging in your cellar or fridge. That doesn’t mean they all stack up quality-wise, but the next time you’re invited to a food and wine pairing, bring one of these beers—all of which will stack up against any wine.

New Belgium La Folie, and Sour Brown Ale
One of the first American breweries to utilize wood-aging and all of the sour goodness that comes with it, was Colorado’s own New Belgium. In 1997 they began producing La Folie, and Sour Brown Ale created by Peter Bouckaert, who honed his brewing chops in the beer mecca of Belgium. The beer is blended from large oak barrels known as foeders, that age the beer from between one and three years. The result is a sharp, sour brew with flavors of tart fruit such as cherry and plum. Devotees of La Folie are apt to keep multiple vintages on hand for vertical tastings, noting the flavor changes from year to year.

Spencer Trappist Ale
The beers made by Belgium’s Trappist order of monks usually inspire reverence. Names like Chimay, Orval, Rochefort and Westmalle are to beer lovers what Ferrari, Maserati and Lamborghini are to automobile afi cionados. In 2013, the fi rst Trappist monastery in the United States began brewing Spencer Trappist Ale out of St. Joseph’s Abbey in Massachusetts. The ale, packaged in regal-looking cork-and-caged 750 ml bottles and available in Colorado, pours a hazy gold with a pure white head. Overall, this beer lives up to the standards set by its Belgian brothers, with a big, fruity character coming from the yeast, and finishing bone dry. The floral and earthy aromatics accentuate as it warms. Some clove notes are evident, but not overwhelming. The beer is unfiltered, meaning yeast remains suspended in the beer, making it more ideal to cellar for a special occasion.

Paradox Farmhouse Noire
If Spencer’s high carbonation and dry finish provide a good start to any meal, Paradox’s Farmhouse Noir pairs fantastically with heavier entrees such as beef and smoked pork. This up-and-comer in the barrel and aged beer game happens to be in our own backyard of Woodland Park (with expansion plans into Divide) and uses the Old World tradition of inoculating its barrel-aged beers with “wild” yeasts from the environment. This method exhibits the local terroir, which makes each beer 100% unique from any other beer on the planet. As the name implies, Farmhouse Noire is dark and rich in rustic and roasty qualities. Aromas of dried and dark fruit linger throughout the drink. Leather and plum, with a hint of tartness evince themselves, with a smooth textured finish like a fine port. Oak contributes tannins in the aftertaste, with qualities of bitter balsamic adding a puckering quality. Its bitterness diminish over time, while the wild yeasts work their magic on any leftover sugars to produce additional sour qualities.

Trinity Red Swingline
Made in Colorado Springs, Trinity Brewing Company’s Red Swingline, a self-proclaimed “IPA Primitif ”, is only 4.1% ABV, but has just as much, if not more, complexity than any extensively aged beer. Big aromatics from non-traditional yeast and bacteria, dry hopping, and spices explode from the glass. The wild yeast adds a definite dimension of sourness, similar to tart berries, but it’s balanced with a high level of carbonation. At 100 IBUs (International Bittering Units… aka, A LOT of hops!), Swingline abounds in tropical fruits, such as passion fruit, tangerine, kiwi, tangerine, and grapefruit. The beer is a dessert in itself, and reminds me of a fresh and juicy fruit salad (not the kind your cheap aunt makes at holidays) that’s perfect as an aperitif, or for that matter, any time of day. “I’d definitely recommend aging Red Swingline, as the Brett flavors will increase with complexity,” suggests brewmaster Jason Yester. Good luck holding out very long after your first taste.

Samuel Adams Utopias
For a truly indulgent experience, one beer stands above the rest in range of fl avor—and cost. A typical bottle (or centerpiece, as the bottle is a ceramic replica of a brew kettle) of Samuel Adams Utopias runs around $150 and ranges between 24-28% abv, one of the highest strength beers on the planet. Utopias achieve this potency and flavor complexity through copious amounts of sugars, which range from the more complex maltose found in barley to highly fermentable sucrose from maple syrup. A prolonged fermentation process using two specialized yeast strains (not your run-of-the-mill brewer’s yeast) elevates the alcohol content. A variety of barrels—ranging from whiskey and rum, to cognac and sherry—ages the beer, and the final product is a blend of multiple years, with some having been aged for 19 years. Getting ahold of a Utopias is one of those rare occurrences that spawns intense speculation in craft beer circles, as less than 15,000 bottles are produced at a time. Nothing about it says beer. Utopias is bottled without carbonation to maximize extensive storage, but carbonating it would be like carbonating a fi ne scotch. The texture is syrupy like a port, with sweet caramel flavors and charred oak. The alcohol is quite evident with a slight burn, but will mellow over time, with oxidative notes of sherry developing. There really is no way to perfectly describe this beer, and it is probably best left to revel in its own mystique until you can experience it for yourself.